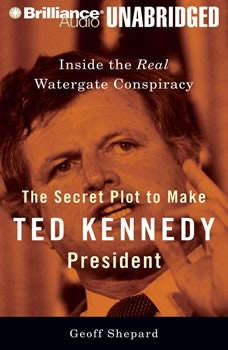 The Secret Plot to Make Ted Kennedy President: Inside the Real Watergate Conspiracy

It didn’t take long for Kennedy Democrats to smell blood in the water after the Watergate break-in – and to take steps to turn it to their political advantage. They realized that a third-rate burglary could be made into the scandal of the century – to cripple the GOP, stem the conservative tide, and change the course of history. If this sounds far-fetched, consider evidence presented by former White House attorney Geoff Shepard that challenges the conventional wisdom about Watergate. Drawing primarily on long-buried documents from the National Archives, Shepard has built a convincing case that Kennedy Democrats conspired to exploit and expand the scandal, with the goal of putting Ted Kennedy in the White House in 1976. Shepard argues that the abuses of power by Kennedy’s cronies dwarf those of the administration they savaged. Among those he singles out for reevaluation are Republican turncoat John Dean, FBI insider Mark “Deep Throat” Felt, Washington Post reporter Bob Woodward, and a young lawyer for the House Judiciary Committee named Hillary Rodham.