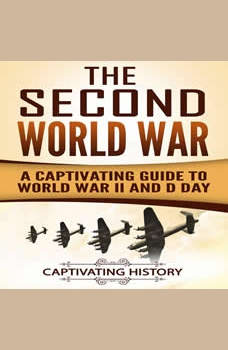 The Second World War: A Captivating Guide to World War II and D-Day

Explore how the Second World War began, the aftermath, and the events in between, while also getting an in-depth look into the extraordinary military operation called D-Day.

The Second World War was one of the most traumatic events in human history. Across the world, existing conflicts became connected, entangling nations in a vast web of violence. It was fought on land, sea, and air, touching every inhabited continent. Over 55 million people died, some of them combatants, some civilians caught up in the violence, and some murdered by their own governments.

It was the war that unleashed the Holocaust and the atomic bomb upon the world. But it was also a war that featured acts of courage and self-sacrifice on every side.

D-Day, the Allied invasion of German-held Normandy, was one of the most extraordinary achievements not only of the Second World War but in the whole of military history. Millions of Allied personnel were involved in launching the greatest sea-borne invasion ever undertaken. Incredible acts of cunning and of courage ensured success in an operation that changed the face of the war, opening a vast new front. It led to the liberation of France and the defeat of Nazi Germany.

Why was this extraordinary operation launched? How was it done? And what happened in the aftermath? Listen to this audiobook now to learn more about World War 2 and D-Day!