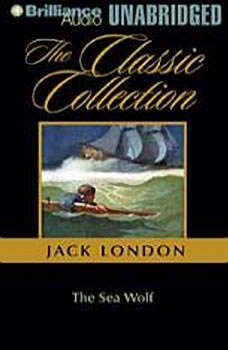 “The danger lay in the heavy fog which blanketed the bay, and of which, as a landsman, I had little apprehension.”This is the first line in this tale of a man uprooted and thrust into the unfamiliar and dangerous world of the sealing sailor. Humphrey Van Weyden, a San Francisco sophisticate and an intellectual, finds himself the captive voyager aboard The Ghost, captained by the brutal and barbaric Wolf Larsen. Van Weyden’s rights disappear as the coast of California vanishes over the horizon.Almost immediately, the slave plots his freedom—and Van Weyden must confront the weakness in his soul, mind, and body.Generations have been spellbound by this harrowing story of danger on the sea, psychological confrontation, and the dual nature of humankind.This novel is part of Brilliance Audio’s extensive Classic Collection, bringing you timeless masterpieces that you and your family are sure to love.

In the desolate, frozen wilds of northwest Canada, a lone wolf fights the heroic daily fight for life in the wild. But after he is captured and cruelly abused by men, he becomes a force of pure rage. Only one man sees inside the killer to his intell...

Steinbeckâ€™s tough yet charming portrait of people on the margins of society, dependent on one another for both physical and emotional survivalPublished in 1945, Cannery Row focuses on the acceptance of life as it is: both the exub...

Crime and Punishment
by Fyodor Dostoevsky

This is the novel that ensured Fyodor Dostoevsky's place as a giant of Russian literature. First published in 1866, this legendary work continues to enthrall readers around the world and earn Dostoevsky legions of fans with every printing. Timeless,...

Sons and Lovers, D. H. Lawrence's first major novel, was also the first in the English language to explore ordinary working-class life from the inside. No writer before or since has written so well about the intimacies enforced by a tightly knit min...

"Steinbeck is an artist; and he tells stories of these lovable thieves and adulterers with a gentle and poetic purity of heart and of prose."--New York Herald TribuneAdopting the structure and themes of the Arthurian legend, Steinbeck created a Came...

Tautly narrated and excruciatingly suspenseful, Double Indemnity gives us an X-ray view of guilt, of duplicity, and of the kind of obsessive, loveless love that devastates everything it touches. First published in 1936, this novel reaffirmed James ...