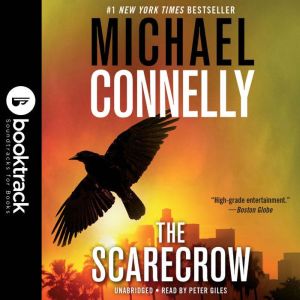 The Scarecrow: Booktrack Edition adds an immersive musical soundtrack to your audiobook listening experience! *FROM THE #1 BESTSELLING AUTHOR OF THE BOSCH SERIES AND THE LINCOLN LAWYER SERIES"An addictive read that, once it grabs you in those first few pages, won't let go of you."--Boston GlobeForced out of the Los Angeles Times amid the latest budget cuts, newspaperman Jack McEvoy decides to go out with a bang, using his final days at the paper to write the definitive murder story of his career.He focuses on Alonzo Winslow, a sixteen-year-old drug dealer in jail after confessing to a brutal murder. But as he delves into the story, Jack realizes that Winslow's so-called confession is bogus. The kid might actually be innocent.Jack is soon running with his biggest story since The Poet made his career years ago. He is tracking a killer who operates completely below police radar-and with perfect knowledge of any move against him. Including Jack's.*Booktrack is an immersive format that pairs traditional audiobook narration to complementary music. The tempo and rhythm of the score are in perfect harmony with the action and characters throughout the audiobook. Gently playing in the background, the music never overpowers or distracts from the narration, so listeners can enjoy every minute. When you purchase this Booktrack edition, you receive the exact narration as the traditional audiobook available, with the addition of music throughout.