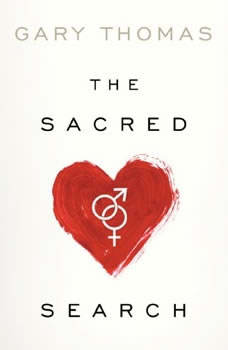 The Sacred Search: What If It's Not about Who You Marry, But Why?

What if being in love isn't a good enough reason to get married? What if dating isn't about finding &quot;the one,&quot; but about serving the one who loves you most? Don't get married until you listen to this audiobook. In The Sacred Search, Gary Thomas challenges you to think beyond finding a &quot;soul mate&quot; and to look for a &quot;sole mate&quot; - someone who will walk with you on your spiritual journey. After all, if you don't know why to marry, you won't know who to marry. The Sacred Search casts a vision for building a relationship around a shared spiritual mission - and making a marriage with eternity at its heart.

This excellent basic guide can help beginners and longtime Christians alike build their faithfulness to pray and to experience God's power as never before, then apply it in their lives, in their homes, and in the world at large.

The five love languages work for everyone (they're not just for married couples)... In this world we&#8217;re surrounded by more people than ever&#151;yet we often still feel alone. Being single or married has nothing to do with whether you ...

It's easy for American Christians to forget how Jesus said his followers would actually live, what their new lifestyle would actually look like. They would, he said, leave behind security, money, convenience, even family for him. They would abandon ...

Love Like You've Never Been Hurt
by Jentezen Franklin

Legendary college basketball coach John Wooden and Jay Carty know that when it comes down to it, success is an equal opportunity player. Anyone can create it in his or her career, family and beyond. Based on John Wooden’s own method to victory...

I&rsquo;d Like You More if You Were More like Me takes on one of life&rsquo;s most important questions: How can I get closer to God and other people? We were created for deep connections. When people have deep connections, says John Ortberg,...

They Shall Expel Demons
by Derek Prince

In this practical, comprehensive handbook on deliverance, Prince shares his own struggle with demons and addresses the fears and misconceptions often associated with deliverance. Speaking from more than 30 years of personal experience in this minist...

What Did you Expect?
by Paul Tripp

Marriage, according to Scripture, will always involve two flawed people living with each other in a fallen world. Yet, in pastor Paul Tripp's professional experience, the majority of couples enter marriage with unrealistic expectations, leaving them...

Face to Face with God
by Bill Johnson

In his unique teaching style, Pastor Bill Johnson delivers a message to help readers pursue God for greater measures of His presence than they have ever known before. In Face to Face with God, readers will learn:* How to "set up an ambush" to appreh...