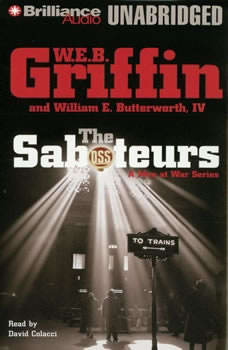 The Saboteurs: A Men at War Novel

If coincidence had thrown these men together in any normal military organization, and if, improbably, they had become buddies there, any commanding officer with enough sense would have broken up the gang as threats to “good military order and discipline.”But they weren’t in any normal military organization.They were in the Office of Strategic Services.The Battle of the Atlantic is at its peak. Packs of German U-boats are hunting and sinking U.S. supply ships. Ships are burning at their moorings in U.S. ports, and a series of explosions has afflicted trains and train stations around the country—is it all accidental or is it sabotage? Meanwhile, Allied forces are secretly preparing to invade first Sicily and then Italy, and there is a lot of work that needs to be done beforehand, some with the most unlikely of helping hands. As the war heats up, “Wild Bill” Donovan’s agents—Dick Canidy, Eric Fulmar, Stan Fine, and the rest of the crew, answerable only to Donovan and the president—suddenly find themselves battling on two fronts at once...and fate is just about to deal them a few surprises.

The Saboteurs: A Men at War Novel
Men at War Series #5