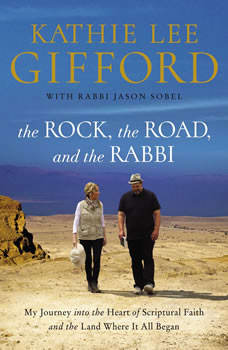 The Rock, the Road, and the Rabbi: My Journey into the Heart of Scriptural Faith and the Land Where It All Began

As a lifelong student of Scripture, Kathie Lee Gifford has always desired a deeper understanding of God’s Word and a deeper knowledge of God Himself. But it wasn’t until she began studying the biblical texts in their original Hebrew and Greek—along with actually hiking the ancient paths of Israel—that she found the fulfillment of those desires.

Now you can walk with Kathie on a journey through the spiritual foundations of her faith:

The Rock (Jesus Christ): Hear directly from Kathie about her life-changing and ever-deepening connection with Jesus, the Lover of her soul.The Road (Israel): Explore dozens of ancient landmarks and historical sites from Israel, the promised land of God’s covenant.The Rabbi (God’s Word): Go beyond a “Sunday school” approach to the Bible by digging into the original languages and deeper meanings of the Holy Scriptures.

As you journey through The Rock, The Road, and The Rabbi, you’ll also find additional content from Messianic Rabbi Jason Sobel throughout the book. Jason’s insight into the Hebrew language, culture, and heritage will open your eyes to the Bible like never before.

Come! Begin your journey toward a deeper faith through The Rock, the Road, and the Rabbi.