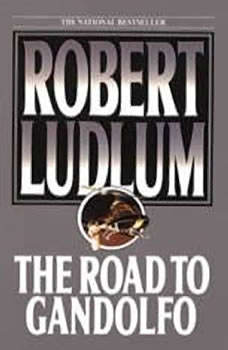 The Road to Gandolfo

War hero and infamous ladies’ man General MacKenzie Hawkins is a living legend. His life story has even been sold to Hollywood. But now he stands accused of defacing a historic monument in China’s Forbidden City. Under house arrest in Peking with a case against him pending in Washington, this looks like the end of Mac’s illustrious career. But he has a plan of his own: kidnap the Pope. What’s the ransom? Just one American dollar—for every Catholic in the world. Add to the mix a slew of shady “investors,” Mac’s four persuasive, well-endowed ex-wives, and a young lawyer and fellow soldier who wants nothing more than to return to private life, and readers have in their hands one relentlessly irreverent page-turner.

“Don’t ever begin a [Robert] Ludlum novel if you have to go to work the next day.”—Chicago Sun-Times

The Gemini Contenders
by Robert Ludlum

Salonika, Greece: December 1939. In the dead of night, a clandestine order of monks embarks on a desperate mission: to transport a mysterious vault to a hiding place high in the Italian Alps. The sinister cache, concealed for centuries, could rip ap...