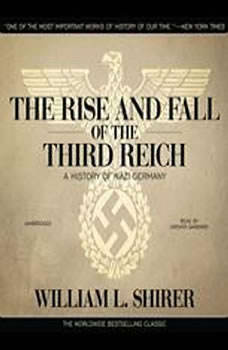 The Rise and Fall of the Third Reich: A History of Nazi Germany

Since its publication in 1960, William L. Shirers monumental study of Hitler's German empire has been widely acclaimed as the definitive record of the twentieth century's blackest hours. The Rise and Fall of the Third Reich offers an unparalleled and thrillingly told examination of how Adolf Hitler nearly succeeded in conquering the world. Shirers unforgettable account of the pivotal characters and events of that critical era benefits from his many years as a reporter and his own personal recollections, as well as from the mass of historical documents retrieved from the German Foreign Office. The result is a brutally objective account of how Hitler wrested political control of Germany and managed to take the country with him on his mad sixyear quest for world domination, only to see it go down in flames in the end.