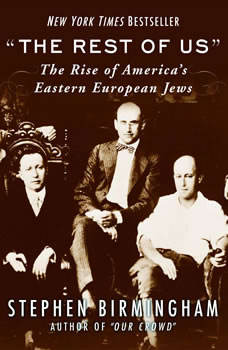 "The Rest of Us": The Rise of America's Eastern European Jews

The New York Times–bestselling history of the Jewish immigrants from Russia and Poland who altered the American landscape from New York to Hollywood.The wave of Eastern European Jewish immigrants who swept into New York in the late nineteenth and early twentieth centuries by way of Ellis Island were not welcomed by the Jews who had arrived decades before. These refugees from czarist Russia and the Polish shtetls who came to America to escape pogroms and persecution were considered barbaric, uneducated, and too steeped in the traditions of the "old country" to be accepted by the more refined and already well-established German-Jewish community. But the new arrivals were tough, passionate, and determined, and in no time they were moving up from the ghetto tenements of New York's Lower East Side to make their marks and their fortunes across the country in a variety of fields, from media and popular music to fashion, motion pictures, and even organized crime.Among the unforgettable personages author Stephen Birmingham profiles are radio pioneer David Sarnoff, makeup mogul Helena Rubinstein, Hollywood tycoons Samuel Goldwyn and Harry Cohn, Broadway composer Irving Berlin, and mobster Meyer Lansky. From the author of "Our Crowd", comes this treasure trove of fascinating tales and unforgettable "rags-to-riches" success stories that celebrates the indomitable spirit of a unique community.