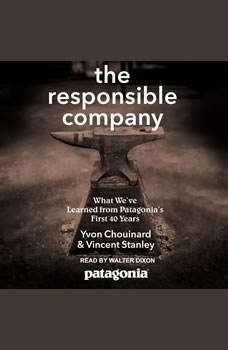 The Responsible Company: What We've Learned From Patagonia's First 40 Years

Patagonia, named by Fortune in 2007 as the coolest company on the planet, has earned a reputation as much for its ground-breaking environmental and social practices as for the quality of its clothes. In this exceptionally frank account, Chouinard and Stanley recount how the company and its culture gained the confidence, by step and misstep, to make its work progressively more responsible, and to ultimately share its discoveries with companies as large as Wal-Mart or as small as the corner bakery. In plain, compelling prose, the authors describe the current impact of manufacturing and commerce on the planet's natural systems and human communities, and how that impact now forces business to change its ways. The Responsible Company shows companies how to reduce the harm they cause, improve the quality of their business, and provide the kind of meaningful work everyone seeks. It concludes with specific, practical steps every business can undertake, as well as advice on what to do, in what order. The advice in this book is simple but powerful: reduce your environmental footprint, make legitimate products that last, reclaim deep knowledge of your business and its supply chain to make the most of opportunities in the years to come, and earn the trust you'll need by treating your workers, customers and communities with respect.