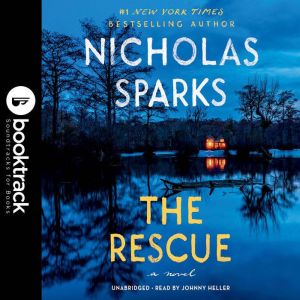 The Rescue: Booktrack Edition adds an immersive musical soundtrack to your audiobook listening experience! *~b~> In this heartfelt romance from #1 New York Times bestselling author Nicholas Sparks, a daring volunteer fireman rescues a single mom--only to discover that falling in love might be the greatest risk of all. When confronted by raging fires or deadly accidents, volunteer fireman Taylor McAden feels compelled to take terrifying risks to save lives. But there is one leap of faith Taylor can't bring himself to make: he can't fall in love. For all his adult years, Taylor has sought out women who need to be rescued, women he leaves as soon as their crisis is over and the relationship starts to become truly intimate. When a raging storm hits his small Southern town, single mother Denise Holton's car skids off the road. The young mom is with her four-year-old son Kyle, a boy with severe learning disabilities and for whom she has sacrificed everything. Taylor McAden finds her unconscious and bleeding, but does not find Kyle. When Denise wakes, the chilling truth becomes clear to both of them. Kyle is gone. During the search for Kyle, a connection between Taylor and Denise takes root. Taylor doesn't know that this rescue will be different from all the others. *Booktrack is an immersive format that pairs traditional audiobook narration to complementary music. The tempo and rhythm of the score are in perfect harmony with the action and characters throughout the audiobook. Gently playing in the background, the music never overpowers or distracts from the narration, so listeners can enjoy every minute. When you purchase this Booktrack edition, you receive the exact narration as the traditional audiobook available, with the addition of music throughout.