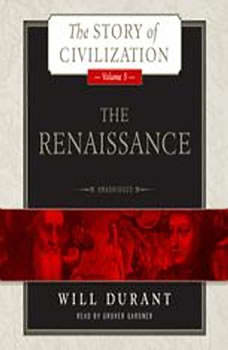 The Renaissance: A History of Civilization in Italy from 13041576 AD

Series: The Story of Civilization #5

An engrossing volume on the Italian Renaissance by Pulitzer Prizewinning historian Will Durant The fifth volume of Durants acclaimed Story of Civilization, The Renaissance chronicles the history of Italy from 1304 to 1576. In this masterful work, listeners will encounter the poets Petrarch and Boccaccio, the fathers of the Renaissance; the paintings, sculptures, and architecture of Milan, Florence, and Venice; the life and accomplishments of Leonardo Da Vinci; the Catholic church and the popes of Avignon and Rome; the politicians and philosophers of Italy, including the Borgia family, Julius II, and Machiavelli; the Italian Wars, the conflicts with France, and the countrys decline.

The Reformation
The Story of Civilization #6

The Age of Reason Begins
The Story of Civilization #7