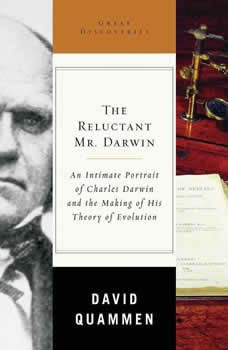 The Reluctant Mr. Darwin: An Intimate Portrait of Charles Darwin and the Making of His Theory of Evolution

In September 1838, a young Englishman named Charles Darwin hit upon the idea that natural selection among competing individuals would lead to wondrous adaptations and species diversity. Twenty-one years passed between that epiphany and publication of On the Origin of Species. The human drama and scientific basis of that time constitute a fascinating, tangled tale that illuminates this cautious naturalist who sparked an intellectual revolution. Drawing from Darwin's secret notebooks and personal letters, David Quammen has sketched a vivid life portrait of the man whose work remains controversial today.

The Reluctant Mr. Darwin: An Intima...
The Great Discoveries Series #1

The Man Who Knew Too Much
The Great Discoveries Series