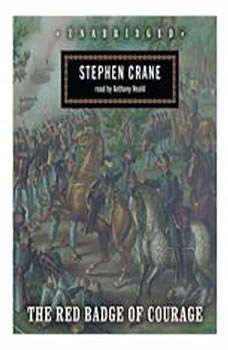 Following its initial appearance in serial form, Stephen Cranes The Red Badge of Courage was published as a complete work in 1895 and quickly became the benchmark for modern antiwar literature. In Henry Flemming, Stephen Crane creates a great and realistic study of the mind of an inexperienced soldier trapped in the fury and turmoil of war. Flemming dashes into battle, at first tormented by fear, then bolstered with courage in time for the final confrontation. Although the exact battle is never identified, Crane based this story of a soldiers experiences during the American Civil War on the 1863 Battle of Chancellorsville. Many veterans, both Union and Confederate, praised the books accurate representation of war, and critics consider its stylistic strength the mark of a literary classic.