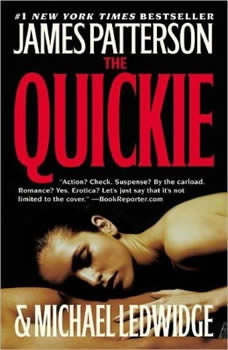 Lauren Stillwell is not your average damsel in distress. When the NYPD cop discovers her husband leaving a hotel with another woman, she decides to beat him at his own game. But her revenge goes dangerously awry, and she finds her world spiraling into a hell that becomes more terrifying by the hour.In a further twist of fate, Lauren must take on a job that threatens everything she stands for. Now, she's paralyzed by a deadly secret that could tear her life apart. With her job and marriage on the line, Lauren's desire for retribution becomes a lethal inferno as she fights to save her livelihood--and her life.Patterson takes us on a twisting roller-coaster ride of thrills in his most gripping audiobook yet. This story of love, lust and dangerous secrets will have listeners' hearts pounding to the very last page.

I very rarely write reviews. But after listening to this audiobook I couldn't help myself. Ever read a book that made you mad that you wasted hours of your life reading it? Well this is NOT one of those books. This has got to be one of his most well written, suspenseful, ironic and emotionally charged books yet! Less sappy and more genuine and realistic, this is a story about how one indiscretion can turn a person's whole life around. This is also about what a woman would do for her relationships and how there are times when we really don't know the people in our lives the way we think. This is one of those stories where you will think,Oh my gawd! What ELSE can go wrong? And midway through you'll realize that things can always get worse but there's a reason for everything. Get this book! You won't be sorry. ~ J Blaize*****

I am a fan of James Patterson. This book only enforces that statement. This book was definitely a thriller. The story changed constantly and only got better and better. I enjoyed this book more than any book in quite a while. Definitely should be on your to read list!

Fabulous thriller. This book keeps you on the edge all the way from the first to the last page. I started reading early morning and finished by late afternoon!. Could not put it down.... if not THe best of Patterson's book, certainly it ranks up there with the very top. You will surely enjoy this one.

I am a big James Patterson fan and I struggled to get through this one. At points I just did not care. Too far fetched, none of the characters did I care about except for her partner.

Such a quick read no pun intended...so many plot twists a couple I saw coming, but most blindsided me. Definitely one of Patterson's best!