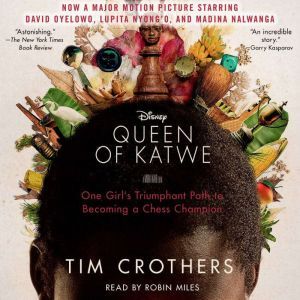 The Queen of Katwe: A Story of Life, Chess, and One Extraordinary Girl

Based on a popular ESPN Magazine article—optioned by Disney films, a finalist for a National Magazine Award and chosen by Dave Eggers for inclusion in Best American Nonrequired Reading 2011—the astonishing true story of Phiona Mutesi, a teenager from the slums of Kampala, Uganda, who—inspired by an unlikely mentor, a war refugee turned missionary—becomes an international chess champion.Phiona Mutesi sleeps in a decrepit shack with her mother and four siblings and struggles to find a single meal each day. Phiona has been in and out of school her whole life because her mother cannot afford it, so she is only now learning to read and write. Phiona Mutesi is also one of the best chess players in the world.      One day in 2005, while searching for food, nine-year-old Phiona followed her brother to a dusty veranda where she met Robert Katende, another child of the Ugandan slums, who works for an American organization that offers relief and religion through sports. Robert introduced Phiona to the game of chess and soon recognized her immense talent. By the age of eleven Phiona was her country’s junior chess champion and at fifteen, her country’s national champion. In September of 2010 she traveled to Siberia, just her second time ever on an airplane, to compete in the Chess Olympiad, the world’s most prestigious team chess event.     Phiona’s dream is to one day become a grandmaster, the most elite title in chess, and to blaze a trail out of Katwe that other children in Robert’s chess community can follow. But to reach that goal, she must grapple with everyday life in one of the world’s most unstable countries, a place where girls are taught to be mothers, not dreamers, and the threats of AIDS, kidnapping, and starvation loom over the people of Katwe.     Acclaimed sports journalist Tim Crothers has written a riveting and inspiring account of one girl’s improbable journey to becoming a chess champion. The Queen of Katwe will thrill every listener who loves a great underdog story.