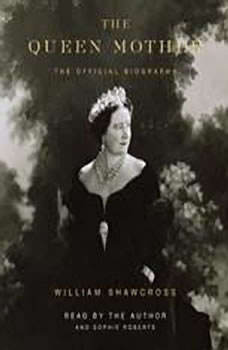 The Queen Mother: The Official Biography

Elizabeth Angela Marguerite Bowes-Lyon—the ninth of the Earl of Strathmore’s ten children—was born on August 4, 1900, and, certainly, no one could have imagined that her long life (she died in 2002) would come to reflect a changing nation over the ourse of an entire century. Now, William Shawcross—given unrestricted access to the Queen Mother’s personal papers, letters, and diaries—gives us a portrait of unprecedented vividness and detail. Here is the girl who helped convalescing soldiers during the First World War . . . the young Duchess of York helping her reluctant husband assume the throne when his brother abdicated . . . the Queen refusing to take refuge from the bombing of London, risking her own life to instill courage and hope in others who were living through the Blitz . . . the dowager Queen—the last Edwardian, the charming survivor of a long-lost era—representing her nation at home and abroad . . . the matriarch of the Royal Family and “the nation’s best-loved grandmother.”

A revelatory royal biography that is, as well, a singular history of Britain in the twentieth century.