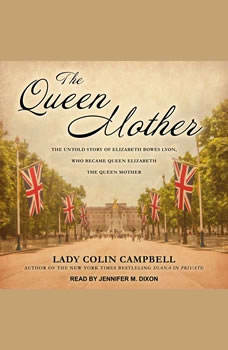 Packed with stunning revelations, this is the inside story of the Queen Mother from the New York Times bestselling author who first revealed the truth about Princess Diana Queen Elizabeth the Queen Mother has been called the "most successful queen since Cleopatra." Her personality was so captivating that even her arch-enemy Wallis Simpson wrote about "her legendary charm." Portrayed as a selfless partner to the King in the Oscar-winning movie The King's Speech, the Queen Mother is most often remembered from her later years as the smiling granny with the pastel hats. When she died in 2002, just short of her 102nd birthday, she was praised for a long life well lived. But there was another side to her story. For the first time, Lady Colin Campbell shows us that the untold life of the Queen Mother is far more fascinating and moving than the official version that has been peddled ever since she became royal in 1923. With unparalleled sources—including members of the Royal Family, aristocrats, and friends and relatives of Elizabeth herself—this mesmerizing account takes us inside the real and sometimes astonishing world of the royal family.