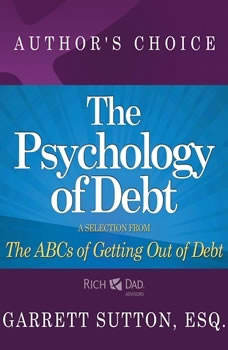 The Psychology of Debt: A Selection from Rich Dad Advisors: The ABCs of Getting Out of Debt

Debt creates winners and losers. Understand the psychology and start winning.A selection from the bestselling RICH DAD ADVISORS: THE ABCs OF GETTING OUT OF DEBT.

Stop Living Paycheck to Paycheck and Get Your Financial Life Together (#GYFLT)! If you're a cash-strapped 20- or 30-something, it's easy to get freaked out by finances. But you're not doomed to spend your life drowning in debt or mystified by mone...

You Need a Budget
by Jesse Mecham

For most people, budgeting conjures up the same feelings as, say, prison and dieting. But your initial instinct couldn’t be further from the truth. You just haven’t budgeted the right way. You Need A Budget will teach you four simple ru...

The Spender's Guide to Debt-Free Living
by Anna Newell Jones

101 Answers to the Toughest Financial Questions on Earth
by Garrett B. Gunderson

Unfortunately, we often put off finding the answers to these questions until it's too late to do us any good. The questions asked in this audiobook are designed to help you think about your fnances now, and come up with your own answers as you liste...

The Recovering Spender
by Lauren Greutman

After learning how to curb her spending habits, Lauren Greutman shares her hard-earned knowledge on how to get out of debt and live without the financial pressures that many people face today. Millions of Americans today are near financial ...

Rich Dad Advisors: The ABCs of Getting Out of Debt
by Garrett Sutton

The Einstein of Money
by Joe Carlen

"Even in 2012, Ben Graham is still a hero to me" -Warren Buffett (from the author's interview with Buffett for The Einstein of Money) Warren Buffett has repeatedly acknowledged Benjamin Graham, a man he personally studied and worked under, as the pr...

The Value of Debt in Building Wealth
by Thomas J. Anderson

Conventional financial management advises people to pay off debt as quickly as possible, but The Value of Debt in Building Wealth turns this idea on its head and shows you how to strategically use debt to your advantage. This comprehensive road map ...

Anyone suffering under the crushing weight of debt knows how impossible it can seem to find a way out. It's overwhelming - and the more complicated the proposed solution, the harder it is to stick with it. That's why "The Debt-Free Spending Plan" is...