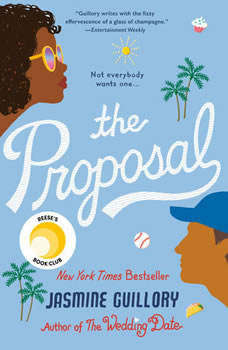 "There is so much to relate to and throughout the novel, there is a sharp feminist edge. Loved this one, and you will too."--New York Times bestselling author Roxane Gay

The author of The Wedding Date serves up a novel about what happens when a public proposal doesn't turn into a happy ending, thanks to a woman who knows exactly how to make one on her own...

When someone asks you to spend your life with him, it shouldn't come as a surprise--or happen in front of 45,000 people.

When freelance writer Nikole Paterson goes to a Dodgers game with her actor boyfriend, his man bun, and his bros, the last thing she expects is a scoreboard proposal. Saying no isn't the hard part--they've only been dating for five months, and he can't even spell her name correctly. The hard part is having to face a stadium full of disappointed fans...

At the game with his sister, Carlos Ibarra comes to Nik's rescue and rushes her away from a camera crew. He's even there for her when the video goes viral and Nik's social media blows up--in a bad way. Nik knows that in the wilds of LA, a handsome doctor like Carlos can't be looking for anything serious, so she embarks on an epic rebound with him, filled with food, fun, and fantastic sex. But when their glorified hookups start breaking the rules, one of them has to be smart enough to put on the brakes...

ONCE YOU FIND Everything in attorney Skye Barclay's life is fitting smoothly into place until she makes the startling discovery that she was adopted. Not only does she learn that her birth mother has died, but now Skye finds out that she has a biolo...

Forged in Desire
by Brenda Jackson

Strong enough to protect her. Bold enough to love her. When good girl Margo Connelly becomes Lamar "Striker" Jennings's latest assignment, she knows she's in trouble. And not just because he's been hired to protect her from an underworl...

One of Amazon's "Best Books to Read in Romance" for September 2018An iBooks "Best of September" PickA GoodReads Best of the Month pick for SeptemberOne of Booklist's Top 10 Romance Debuts for 2018 One of BookBubs Best Fall Romances of 2018Marle...

A mage and a warrior must see beyond their facades and embrace the bond that links their souls in this powerful Carpathian novel from #1 New York Times bestselling author Christine Feehan. At any other time, Julija Brennan would find solace in the q...

The Midnight Hour
by Brenda Jackson

Not the Girl You Marry
by Andie J. Christopher

"NOT THE GIRL YOU MARRY is funny, heartfelt, and super sexy!"—Jasmine Guillory, New York Times bestselling author How To Lose a Guy in 10 Days gets a millennial makeover in this romantic comedy by USA Today bestselling author Andie J. Chr...

As seen on The Today Show! The new exhilarating romance from The New York Times bestselling author of The Proposal, a Reese Witherspoon x Hello Sunshine Book Club Pick!   Maddie and Theo have two things in common: 1. Alexa is the...

One Night with the CEO
by Mia Sosa

"This debut romance sparkles." -- Library Journal (starred review) on Unbuttoning the CEOTWO TICKETS TO PARADISEAfter some disappointing dates, Karen Ramirez has concluded that great sex is for other people. Especially since medical school won't le...