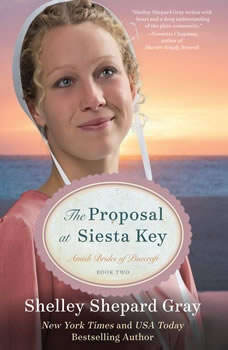 The Proposal at Siesta Key

Penny Troyer rarely disobeys her parents. But tonight, she's bending the rules because Michael Knoxx, the most famous member of The Knoxx Family Singers, a traveling Mennonite Evangelical family - is scheduled to speak. Penny has heard of Michael - how he lost part of his leg in a terrible accident and uses the experience to inspire others - and knows she must meet him. Though he speaks about living life to the fullest, Michael knows he needs to take his own advice. Life on the road is grueling and Michael wants to slow down. So when a twist of fate allows him the chance to stay a little longer in Pinecraft, Michael knows God is showing him a new path, especially when he discovers how much he and Penny Troyer have in common.

The Proposal at Siesta Key
Amish Brides of Pinecraft series #2

The Promise of Palm Grove
Amish Brides of Pinecraft series #1