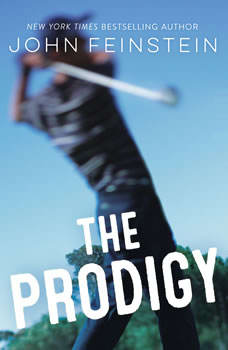 From award-winning sportswriter John Feinstein, The Prodigy is a YA audiobook about a teen golfer poised to blaze his way into Masters Tournament history—and he’ll face secrecy, sacrifice, and the decision of a lifetime to get there.Seventeen-year-old Frank Baker is a golfing sensation. He’s set to earn a full-ride scholarship to play at the university of his choice, but his single dad wants him to skip college and turn pro—golf has taken its toll on the family bank account, and his dad is eager to start cashing in on his son’s prowess. Frank knows he isn’t ready for life on the pro tour—regardless of the potential riches—so his swing coach enlists a professional golfer turned journalist to be Frank’s secret adviser.Pressure mounts when, after reaching the final of the U.S. Amateur tournament, Frank wins an automatic invite to the Masters. And when the prodigy, against all odds, starts tearing up the course at Augusta National, sponsors are lined up to throw money at him—and his father. But Frank’s entry in the Masters hinges on maintaining his standing as an amateur. Can he and his secret adviser—who has his own conflicts—keep Frank’s dad at bay long enough to bring home the legendary green jacket?

From the acclaimed #1 bestselling author . . . a riveting journey through the world of minor-league baseball“No one grows up playing baseball pretending that they’re pitching or hitting in Triple-A.” —Chris Schwinde...

The Cardturner
by Louis Sachar

How are we supposed to be partners? He can’t see the cards and I don’t know the rules!The summer after junior year of high school looks bleak for Alton Richards. His girlfriend has dumped him to hook up with his best friend. He has no mo...

For fans of Make It Or Break It, a novel about the road to Olympics for the world's most elite gymnasts.Work harder than anyone. Be the most talented. Sacrifice everything. And if you’re lucky, maybe you will go to the Olympics.   Grace l...

Danny Jordan is one of two lucky winners of the US Basketball Writer's Association's contest for aspiring journalists. His prize? A trip to New Orleans and a coveted press pass for the Final Four. It's a basketball junkie's dream come true!But th...

The King's Men
by Nora Sakavic

Neil Josten is out of time. He knew when he came to PSU he wouldn't survive the year, but with his death right around the corner he's got more reasons than ever to live. Befriending the Foxes was inadvisable. Kissing one is unthinkable. Neil should...

The Raven King
by Nora Sakavic

The Foxes are a fractured mess, but their latest disaster might be the miracle they've always needed to come together as a team. The one person standing in their way is Andrew, and the only one who can break through his personal barriers is Neil. E...

The Foxhole Court
by Nora Sakavic

Neil Josten is the newest addition to the Palmetto State University Exy team. He's short, he's fast, he's got a ton of potential—and he's the runaway son of the murderous crime lord known as The Butcher. Signing a contract with the PSU Foxes ...

A. S. King meets Chris Crutcher in boxing journalist Sarah Deming's YA novel about a young female boxer who learns to fight for what she wants. Gravity "Doomsday" Delgado is good at breaking things. Maybe she learned it from her broken home.But sin...

The First Major
by John Feinstein

From the #1 New York Times bestselling author of A Good Walk Spoiled, a dramatic chronicle of the bitterly-fought 2016 Ryder Cup pitting a U.S. team out for revenge against the Europeans determined to keep the Cup out of American hands.Coming into 2...