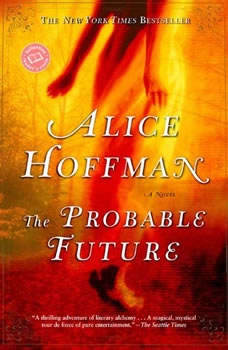 Women of the Sparrow family have unusual gifts. Elinor can detect falsehood. Her daughter, Jenny, can see people's dreams when they sleep. Granddaughter Stella has a mental window to the future - a future that she might not want to see. In Alice Hoffman's latest tour de force, this vivid and intriguing cast of characters confronts a haunting past - and a very current murder - against the evocative backdrop of small-town New England. By turns chilling and enchanting, The Probable Future chronicles the Sparrows' legacy as young Stella struggles to cope with her disturbing clairvoyance. Her potential to ruin or redeem becomes unbearable when one of her premonitions puts her father in jail, wrongly accused of homicide. Yet this ordeal also leads Stella to the grandmother she was forbidden to meet, and to an historic family home full of talismans from her ancestors.

Two huge problems with this book recording. 1The narrator was awful--terrible voice, terrible phrasing, and 2 all 99 tracks are cut into the CD without regard for appropriate placement. As a result, the tracks are actually cut in the middle of sentences, causing quite a pause between the connected words and making the sentences that are already being read so poorly seem disjointed and sensless. If you are an Alice Hoffman fan, then just get the book and read it yourself.