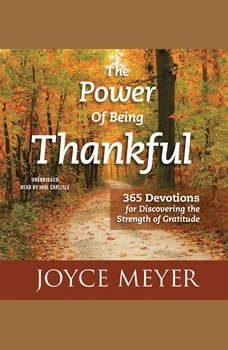 The Power of Being Thankful: 365 Devotions for Discovering the Strength of Gratitude

New York Times bestselling author Joyce Meyer believes that giving thanks to God daily will positively impact our lives. When we pause to acknowledge His blessings it restores us to a state of spiritual peace. In this 365 day devotional, Joyce offers an inspiring message that will spark an attitude of gratitude in our hearts. Through uplifting Scripture, she illustrates God's never-ending love, inexhaustible grace, and always-accessible presence in our lives. As we develop a renewed outlook, we will better recognize and be further blessed by God's abundant goodness.Each devotion will also include a prayer of thanks, so that we may begin every day ready to receive the transforming power of a thankful heart.

Faith for Exiles
by Aly Hawkins

The Family of Jesus
by Karen Kingsbury

Inspired to Soar!
by Ezra Knight

Draw the Circle
by Mark Batterson