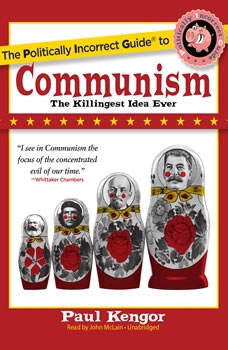 The Politically Incorrect Guide to Communism

The worst idea in history is back!Communism has wrecked national economies, enslaved whole peoples, and killed more than a hundred million men and women. Whats not to like?Too many young Americans are supporting communism. Millennials prefer socialism to capitalism, and 25 percent have a positive view of Lenin. One in four Americans believe that George W. Bush killed more people than Joseph Stalin. And 69 percent of Millennials would vote for a socialist for president.They ought to know better. Communism is the most dangerous idea in world history, producing dire poverty, repression, and carnage wherever it has been tried. And no wonderbecause communism flatly denies morality, human nature, and basic facts. But its always going to be different this time.Renowned scholar and bestselling author Paul Kengor unmasks communism, exposing its blood-drenched history and the strange sway it has long exercised over much of American media and education. He reveals:Stalin alone killed six times as many people as HitlerThe Khmer Rouge slaughtered more than a third of the population of CambodiaCommunists in Eastern Europe and worldwide tortured ChristiansCommunist Party USA (CPUSA) was directly controlled by the SovietsObamas CIA director voted for the CPUSA candidate for president in 1980Unrepentant sixties-era communists are educating American teachers todayThe Politically Incorrect Guide to Communism debunks the worlds worst ideology, sounds the alarm about its disturbing popular resurgence, and arms you with facts you need to refute its appeal.

Deceiving the Sky
by Bill Gertz

The Communist Manifesto
by Karl Marx

The Communist Manifesto and Other Wri...
by Karl Marx

Why You Should Be a Socialist
by Nathan J. Robinson

The Problem with Socialism
by Thomas DiLorenzo

The Socialist Manifesto
by Bhaskar Sunkara