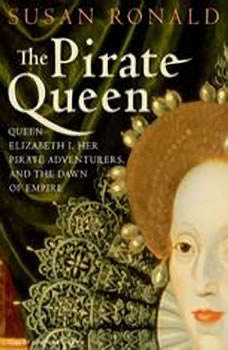 The Pirate Queen: Queen Elizabeth I, Her Pirate Adventurers, and the Dawn of Empire

Dubbed the "pirate queen" by the Vatican and Spain's Philip II, Elizabeth I was feared and admired by her enemies. Extravagant, whimsical, and hot-tempered, Elizabeth was the epitome of power. Her visionary accomplishments were made possible by her daring merchants, gifted rapscallion adventurers, astronomer philosophers, and her stalwart Privy Council, including Sir William Cecil, Sir Francis Walsingham, and Sir Nicholas Bacon. All these men contributed their vast genius, power, greed, and expertise to the advancement of England. In The Pirate Queen, historian Susan Ronald offers a fresh look at Elizabeth I, focusing on her uncanny instinct for financial survival and the superior intellect that propelled and sustained her rise. The foundation of Elizabeth's empire was built on a carefully choreographed strategy whereby piracy transformed England from an impoverished state on the fringes of Europe into the first building block of an empire that covered two-fifths of the world. Based on a wealth of historical sources and thousands of personal letters between Elizabeth and her merchant adventurers, advisers, and royal "cousins," The Pirate Queen tells the thrilling story of Elizabeth and the swashbuckling mariners who terrorized the seas, planted the seedlings of an empire, and amassed great wealth for themselves and the Crown.