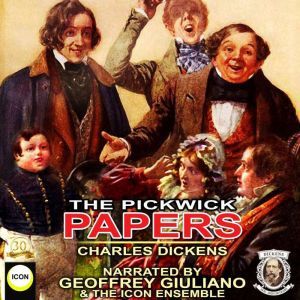 “Poetry makes life what lights and music do the stage.”“There are very few moments in a man's existence when he experiences so much ludicrous distress, or meets with so little charitable commiseration, as when he is in pursuit of his own hat.”? Charles Dickens, The Pickwick PapersThe Pickwick Papers was Charles Dickens' first novel. Because of his success with Sketches by Boz published in 1836 Dickens was asked by the publisher Chapman & Hall to supply descriptions to explain a series of comic "cockney sporting plates" by illustrator Robert Seymour,[and to connect them into a novel. The book became Britain's first real publishing phenomenon, with bootleg copies, theatrical performances, Sam Weller joke books, and other merchandise. On its cultural impact, Nicholas Dames in The Atlantic writes, “Literature” is not a big enough category for Pickwick. It defined its own, a new one that we have learned to call “entertainment.” Published in 19 issues over 20 months, the success of The Pickwick Papers popularized serialised fiction and cliffhanger endings.Seymour's widow claimed the idea for the novel was originally her husband's, but Dickens strenuously denied any specific input in his preface to the 1867 edition: "Mr. Seymour never originated or suggested an incident, a phrase, or a word, to be found in the book."Charles Dickens was an English writer and social critic. He created some of the world's best-known fictional characters and is regarded by many as the greatest novelist of the Victorian era. His works enjoyed unprecedented popularity during his lifetime and, by the 20th century, critics and scholars had recognized him as a literary genius. His novels and short stories are widely read today.Born in Portsmouth, Dickens left school to work in a factory when his father was incarcerated in a debtors' prison. Despite his lack of formal education, he edited a weekly journal for 20 years, wrote 15 novels, five novellas,