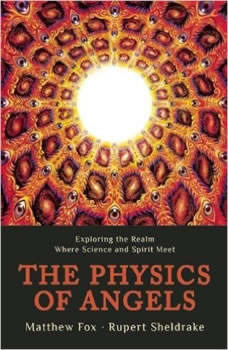 The Physics of Angels: Exploring the Realm Where Science and Spirit Meet

What are angels? Many people believe in angels, but few can define these enigmatic spirits. Now visionary theologian Matthew Fox and acclaimed biologist Rupert Sheldrake - pioneers in modern religious thinking and scientific theory - launch a groundbreaking exploration into the ancient concept of the angel and restore dignity, meaning, and joy to the time-honored belief in these heavenly beings. Angels constitute one of the most fundamental themes in human spiritual and religious experience. All cultures acknowledge the existence of spirits at levels beyond the human. In the West we call them angels, but they go under different names in other traditions. (Native Americans, for example, call them "spirits.") We are entering a new phase of both science and theology. Fox and Sheldrake explore many significant questions raised by both traditions about the existence and role of consciousness beyond the human level. This dialog between Fox and Sheldrake concentrates on three giants of the Western tradition whose treatment of angels is particularly broad, deep, and influential. They are Dionysius the Areopagite, a Syrian monk whose classic work The Celestial Hierarchies was written in the sixth century; Hildegard of Bingen, a German abbess of the twelfth century; and St. Thomas Aquinas, a philosopher-theologian of the thirteenth century. Fox and Sheldrake have selected their most important and relevant passages about angels, and each is followed by a discussion exploring their meaning from both a theological and a scientific perspective. Also explored are the fascinating parallels between Thomas Aquinas speaking of angels in the Middle Ages and Albert Einstein speaking of photons in this century. Hence the title of this book, The Physics of Angels. The exploration of angels in a living cosmos enlivens and enriches both religion and science and contributes to the deepening exploration of consciousness - on this planet and beyond.

Would You Baptize an Extraterrestrial...
by Guy Consolmagno, SJ

The Edge of Evolution
by Michael J. Behe

The Physics of God
by Joseph Selbie

Seven Days That Divide the World
by John C. Lennox

Physics of the Soul
by PhD Goswami

War of the Worldviews
by Deepak Chopra, M.D.