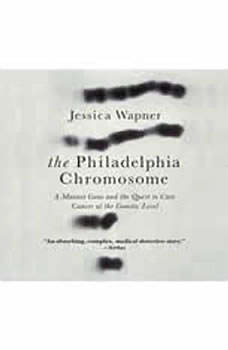 The Philadelphia Chromosome: A Mutant Gene and the Quest to Cure Cancer at the Genetic Level

Philadelphia, 1959: A scientist scrutinizing a single human cell under a microscope detects a missing piece of DNA. That scientist, David Hungerford, had no way of knowing that he had stumbled upon the starting point of modern cancer research— the Philadelphia chromosome. It would take doctors and researchers around the world more than three decades to unravel the implications of this landmark discovery. In 1990, the Philadelphia chromosome was recognized as the sole cause of a deadly blood cancer, chronic myeloid leukemia, or CML. Cancer research would never be the same.

Science journalist Jessica Wapner reconstructs more than forty years of crucial breakthroughs, clearly explains the science behind them, and pays tribute—with extensive original reporting, including more than thirty-five interviews—to the dozens of researchers, doctors, and patients with a direct role in this inspirational story. Their curiosity and determination would ultimately lead to a lifesaving treatment unlike anything before it.

The Philadelphia Chromosome chronicles the remarkable change of fortune for the more than 70,000 people worldwide who are diagnosed with CML each year. It is a celebration of a rare triumph in the battle against cancer and a blueprint for future research, as doctors and scientists race to uncover and treat the genetic roots of a wide range of cancers.