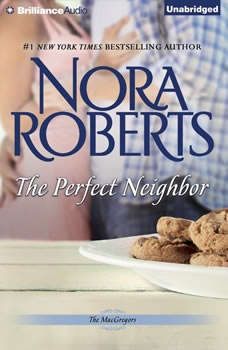 #1 New York Times and USA Today bestselling author Nora Roberts enchants again with this beloved classic about the passionate and headstrong MacGregor family.Brooding loner Preston McQuinn's new apartment, like his life, is just the way he prefers it—dark and empty. But when sunny Cybil Campbell comes barging into his well-ordered gloom, he can't deny a grudging fascination with his bright, bubbly neighbor. Preston thought he'd closed the door on love for good, so why is he suddenly longing to open up his heart to his incredibly perfect neighbor?

The Perfect Neighbor
The MacGregors #11