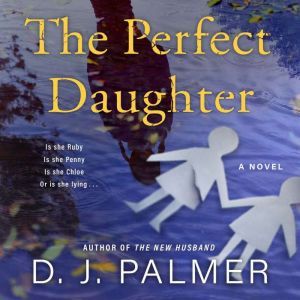 The Perfect Daughter: A Novel

The Perfect Daughter is a thriller that explores the truth or lies behind a teenage girl's multiple personality disorder, from D.J. Palmer, the author of The New Husband.

Grace never dreamt she’d visit her teenaged daughter Penny in the locked ward of a decaying state psychiatric hospital, charged with the murder of a stranger. There was not much question of her daughter’s guilt. Police had her fingerprints on the murder weapon and the victim’s blood on her body and clothes. But they didn’t have a motive.

Grace blames herself, because that’s what mothers do—they look at their choices and wonder, what if? But hindsight offers little more than the chance for regret.

None of this was conceivable the day Penny came into her life. Then, it seemed like a miracle. Penny was found abandoned, with a mysterious past, and it felt like fate brought Penny to her, and her husband Arthur. But as she grew, Penny's actions grew more disturbing, and different "personalities" emerged.

Arthur and Grace took Penny to different psychiatrists, many of whom believed she was putting on a show to help manage her trauma. But Grace didn’t buy it. The personas were too real, too consistent. It had to be a severe multiple personality disorder. One determined psychiatrist, Dr. Mitch McHugh, helped discover someone new inside Penny—a young girl named Abigail. Is this the nameless girl who was abandoned in the park years ago? Mitch thinks Abigail is the key to Penny’s past and to the murder. But as Grace and Mitch dig deeper, they uncover dark and shocking secrets that put all their lives in grave danger.