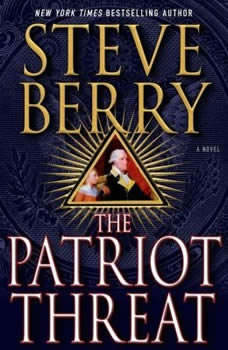 In an innovative new approach, Macmillan Audio and Steve Berry have produced an expanded, annotated Writerâ€™s Cut audiobook edition of The Patriot Threat. Critically-acclaimed, award-winning narrator Scott Brick returns as the voice of dauntless protagonist Cotton Malone and New York Times bestselling author Steve Berry has written and recorded behind-the-scenes commentary filled with insights into the fascinating and little-known historical facts that fuel his novel. The 16th Amendment to the Constitution legalized federal income tax, but what if there were problems with the 1913 ratification of that amendment? Secrets that call into question decades of tax collecting. There is a surprising truth to this possibilityâ€”a truth wholly entertained by Steve Berry, a top-ten New York Times bestselling writer, in his new thriller, The Patriot Threat. His protagonist, Cotton Malone, once a member of an elite intelligence division within the Justice Department known as the Magellan Billet, is now retired. But when his former boss, Stephanie Nelle, asks him to track a rogue North Korean who may have acquired some top secret Treasury Department filesâ€”the kind that could force the United States to its kneesâ€”Malone is vaulted into a harrowing twenty-four-hour chase that begins on the water in Venice and ends in the remote highlands of Croatia. With appearances by Franklin Roosevelt, Andrew Mellon, and a curious painting that still hangs in the National Gallery of Art, Steve Berryâ€™s trademark mix of history and suspense is 90% fact and 10% exciting speculation, a provocative thriller that poses a dangerous question: What if the Federal income tax is illegal?

State of Fear
by Michael Crichton

In Paris, a physicist dies after performing a laboratory experiment for a beautiful visitor. In the jungles of Malaysia, a mysterious buyer purchases deadly cavitation technology, built to his specifications.In Vancouver, a small research submarine ...

Available for the first time Unabridged on CD in an all-new recording by Scott Brick, the first of the blockbuster thrillers by New York Times bestselling author David Baldacci. The book that will change the way you think about Washington - and pow...

#1 New York Times bestselling author Brad Thor delivers an action-packed thriller starring Scot Harvath who must endure the burning streets of Manhattan, where he can administer his own form of justice and finally exact his bitter revenge.July 4th w...

The Bishop's Pawn
by Steve Berry

In a night of shattering brutality, three of Washingtons's most powerful and unscrupulous politicians have been executed with surgical precision. Their assassins, vanishing without a trace, have delivered a shocking ultimatum to the leaders of the A...