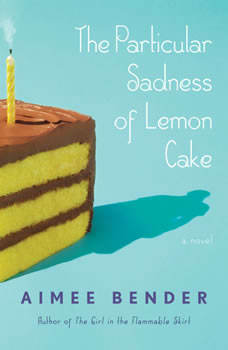 The Particular Sadness of Lemon Cake

The wondrous Aimee Bender conjures the lush and moving story of a girl whose magical gift is really a devastating curse.

On the eve of her ninth birthday, unassuming Rose Edelstein, a girl at the periphery of schoolyard games and her distracted parents’ attention, bites into her mother’s homemade lemon-chocolate cake and discovers she has a magical gift: she can taste her mother’s emotions in the cake. She discovers this gift to her horror, for her mother—her cheerful, good-with-crafts, can-do mother—tastes of despair and desperation. Suddenly, and for the rest of her life, food becomes a peril and a threat to Rose.

The curse her gift has bestowed is the secret knowledge all families keep hidden—her mother’s life outside the home, her father’s detachment, her brother’s clash with the world. Yet as Rose grows up she learns to harness her gift and becomes aware that there are secrets even her taste buds cannot discern.

The Particular Sadness of Lemon Cake is a luminous tale about the enormous difficulty of loving someone fully when you know too much about them. It is heartbreaking and funny, wise and sad, and confirms Aimee Bender’s place as “a writer who makes you grateful for the very existence of language” (San Francisco Chronicle).