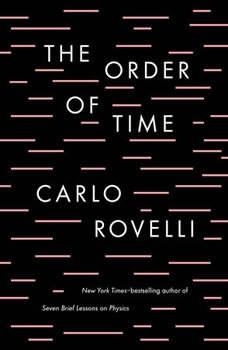 The Order of Time

"Meet the new Stephen Hawking . . . The Order of Time is a dazzling book." --The Sunday Times

From the bestselling author of Seven Brief Lessons on Physics, a concise, elegant exploration of time.

Why do we remember the past and not the future? What does it mean for time to "flow"? Do we exist in time or does time exist in us? In lyric, accessible prose, Carlo Rovelli invites us to consider questions about the nature of time that continue to puzzle physicists and philosophers alike.

For most readers this is unfamiliar terrain. We all experience time, but the more scientists learn about it, the more mysterious it remains. We think of it as uniform and universal, moving steadily from past to future, measured by clocks. Rovelli tears down these assumptions one by one, revealing a strange universe where at the most fundamental level time disappears. He explains how the theory of quantum gravity attempts to understand and give meaning to the resulting extreme landscape of this timeless world. Weaving together ideas from philosophy, science and literature, he suggests that our perception of the flow of time depends on our perspective, better understood starting from the structure of our brain and emotions than from the physical universe.

Already a bestseller in Italy, and written with the poetic vitality that made Seven Brief Lessons on Physics so appealing, The Order of Time offers a profoundly intelligent, culturally rich, novel appreciation of the mysteries of time.