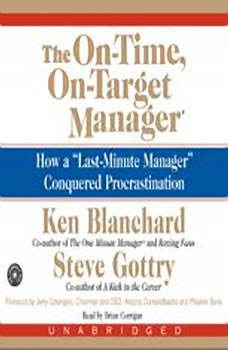 Ken Blanchard's phenomenal bestsellers, such as The One Minute Manager® and Raving Fans®, have made him a globally recognized business legend. Now, he has joined with noted business author Steve Gottry to explore one of the most common and insidious problems plaguing the workplace -- procrastination.The On-Time, On-Target Manager tells the highly recognizable story of Bob, a middle manager who tends to put things off to the last minute. He misses deadlines, rationalizes, justifies, and tries to explain. Luckily, Bob is sent to his company's CEO -- a new kind of CEO -- the "Chief Effectiveness Officer" -- who helps him deal with the three negative side effects of procrastination: lateness, poor work quality, and stress to himself and others. Bob learns how to overcome procrastination, and transforms himself into a productive On-Time, On-Target Manager through the Three P strategy.With this engaging parable, Blanchard and Gottry tackle the problem of procrastination head-on, offering practical strategies any professional can immediately put into practice to improve his or her performance.

The 21 Irrefutable Laws of Leadership
by John C. Maxwell

In The 21 Irrefutable Laws of Leadership, John C. Maxwell combined insights learned from his 40-plus years of leadership successes and mistakes with observations from the worlds of business, politics, sports, religion, and military conflict. Some hi...

Developing the Leader Within You
by John C. Maxwell

Developing the LeaderWithin You is Dr. Maxwellas first and most enduring leadership book, havingsold more than one million copies. In this Christian Leaders Series edition ofthis Maxwell classic, you will discover the biblical foundation for lea...