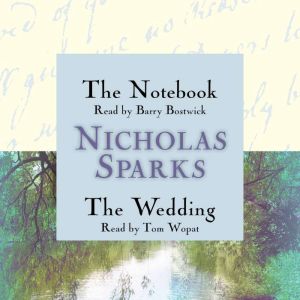 In The Notebook, Noah Calhoun is haunted by images of the girl he lost more than a decade earlier. At twenty-nine socialite Allie Nelson is about to marry a wealthy lawyer, but she cannot stop thinking about the boy long ago who stole her heart. Thus begins the story of a love do enduring and deep it can turn tragedy into triumph, and may even have the power to create a miracle. Also a 2004 award winning motion picture. In The Wedding, Wilson Lewis hates admitting it, but the romance has vanished from his 30-year marriage. Can he learn from his in-laws, Allie and Noah Calhoun who've had a magnificent 50-year love affair and express his emotions? He's certain his love for Jane has only intensified. But can he make her fall in love with him again.