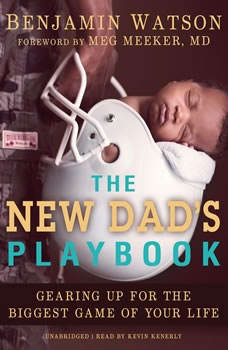 The New Dads Playbook: Gearing Up for the Biggest Game of Your Life

When it comes to the unknown territory of having a baby, moms-to-be have nearly unending resources to plan and execute a healthy pregnancy and navigate those first months and years as a parent with confidence. New dads? Not so much. They want to get in the game too, but, says Super Bowl champion Benjamin Watson, I could find clearer direction for putting together a baby swing than for taking care of a newborn child. The New Dads Playbook is every mans game plan to being the best partner and the best father, from preseason (preparing for fatherhood) to Super Bowl (birth) to postseason (after baby is home). It helps men understand what their wives are going through physically and emotionally during and after pregnancy, allowing them to support their most important teammate. It tells men what to expect when their baby is homeand what to do when the unexpected happens. This tell-it-like-it-is book will take men from just winging it to winning it.

Father Knows Less, or: "Can I Cook My...
by Wendell Jamieson

What to Expect When Your Wife is Expa...
by Thomas Hill