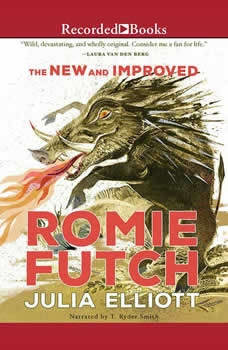 The New and Improved Romie Futch

From the author of The Wilds, which Publishers Weekly called "a brilliant combination of emotion and grime, wit and horror," comes a debut novel that is part dystopian satire, part Southern Gothic tall tale: a disturbing yet hilarious romp through a surreal New South where newfangled medical technologies change the structure of the human brain and genetically modified feral animals ravage the blighted landscape. Down on his luck and still pining for his ex-wife, South Carolina taxidermist Romie Futch spends his evenings drunkenly surfing the Internet before passing out on his couch. In a last-ditch attempt to pay his mortgage, he replies to an ad and becomes a research subject in an experiment conducted by the Center for Cybernetic Neuroscience in Atlanta, Georgia. After "scientists" download hifalutin humanities disciplines into their brains, Romie and his fellow guinea pigs start debating the works of Foucault and hashing out the intricacies of postmodern subjectivity. The enhanced taxidermist, who once aspired to be an artist, returns to his hometown ready to revolutionize his work and revive his failed marriage. As Romie tracks down specimens for his elaborate animatronic taxidermy dioramas, he develops an Ahab-caliber obsession with bagging "Hogzilla," a thousand-pound feral hog that has been terrorizing Hampton County. Cruising hog-hunting websites, he learns that this lab-spawned monster possesses peculiar traits. Pulled into an absurd and murky underworld of biotech operatives, FDA agents, and environmental activists, Romie becomes entangled in the enigma of Hogzilla's origins. Exploring the interplay between nature and culture, biology and technology, reality and art, The New and Improved Romie Futch probes the mysteries of memory and consciousness, offering a darkly comic yet heartfelt take on the contemporary human predicament.