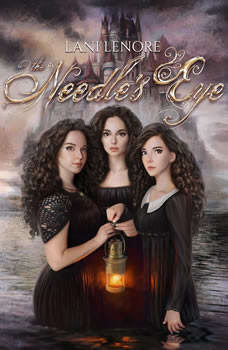 Once, there were three sons… When Elizabeth, Delia and Emily were children, their grandfather told them a story about an island castle called the Needle’s Eye—home to a lord and his three sons—which could be seen from the coast of their small village. The castle has since been hidden by a mysterious and constant fog that looms over the water, but his story speaks of nine girls who rowed out to the castle on Needle’s Eye Island. None of them returned, and the lord’s family was never heard from again.

Years later, following their grandfather’s death, the last ties that bind the three sisters to the village—and each other—seem to be breaking. Elizabeth is set to marry, Emily fears being left alone, and Delia is content to be bitter forever. A careless mistake on the water leads their boat to be swallowed by the forbidden fog, and when they emerge from that cloud, the girls discover that the island castle they’d dreamed of is not a myth.

The mere innocence of a curious glimpse becomes a fight for survival when the girls are cursed by the lord’s ghostly sons. The sisters learn firsthand what happened to the nine girls who never returned home, and their choice quickly becomes apparent: they can play the games of the three soulless men, or they can give in to death, never to see one another again.

--The Needle’s Eye is a horror story, a mystery, and a dark romance. It is a bloody and brutal fairy tale, meant to explore the consequences of falling for a villain.--