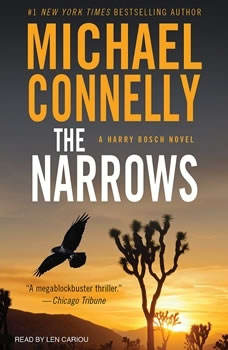 FBI agent Rachel Walling finally gets the call she's dreaded for years, the one that tells her the Poet has surfaced. She has never forgotten the serial killer who wove lines of poetry in his hideous crimes--and apparently he has not forgotten her.Former LAPD detective Harry Bosch gets a call, too--from the widow of an old friend. Her husband's death seems natural, but his ties to the hunt for the Poet make Bosch dig deep. Arriving at a derelict spot in the California desert where the feds are unearthing bodies, Bosch joins forces with Rachel. Now the two are at odds with the FBI...and squarely in the path of the Poet, who will lead them on a wicked ride out of the heat, through the narrows of evil, and into a darkness all his own...

I truly enjoyed every minute of this book. I have now read all of the Bosch books and still can't get enough. Do wish Connelly was as prolific a writer as say Steele - but would the character/plot suffer? I guess I will just have to wait for the next one. In the meantime there's Jack Reacher by Childs among others.

Michael Connelly is one of my favorite authors and who doesn't love Harry Bosch the work-a-holic detective who can't stay away from the stickiest crimes to solve. Great read, I recommend.

This book is the sequel to The Poet. The Poet was engrossing and interesting. Felt that Connelly didn't put all his efforts into this one and just wrote a sequel to get a sequel out. Found it very slow. Does have detective Harry Bosch, The FBI, and other familiar characters, but not enough that really held my interest. Struggle to get through it. Can't say I would recommend it. Read other Connelly books and keep this for last.

The Narrows
A Harry Bosch Novel #10