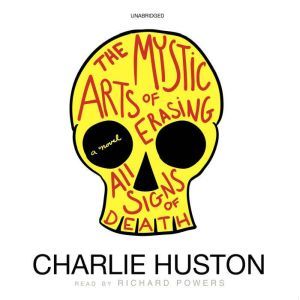 The Mystic Arts of Erasing All Signs of Death: A Novel

With a style that is razor sharp, an eye that never shies from the gritty details, and a taste for stories that simultaneously shock, disturb, and entertain, Charlie Huston is one of a kind. And The Mystic Arts of Erasing All Signs of Death is the type of story–swift, twisted, hilarious, somehow hopeful–that only he could dream up.

The fact is, whether it's a dog hit by a train or an old lady who had a heart attack on the can, someone has to clean up the nasty mess. And that someone is Webster Fillmore Goodhue, who just may be the least likely person in Los Angeles County to hold down such a gig. With his teaching career derailed by tragedy, Web hasn't done much for the last year except some heavy slacking. But when his only friend in the world lets him know that his freeloading days are over, and he tires of taking cash from his spaced-out mom and refuses to take any more from his embittered father, Web joins Clean Team–and soon finds himself sponging a Malibu suicide's brains from a bathroom mirror, and flirting with the man's bereaved and beautiful daughter.

Then things get weird: The dead man's daughter asks a favor. Her brother's in need of somebody who can clean up a mess. Every cell in Web's brain tells him to turn her down, but something else makes him hit the Harbor Freeway at midnight to help her however he can. Is it her laugh? Her desperate tone of voice? The chance that this might be history's strangest booty call? Whatever it is, soon enough it's Web who needs the help when gun-toting California cowboys start showing up on his doorstep. What's the deal? Is it something to do with what he cleaned up in that motel room in Carson? Or is it all about the brewing war between rival trauma cleaners? Web doesn't have a clue, but he'll need to get one if he's going to keep from getting his face kicked in. Again. And again. And again.

Full of black humor, stunning violence, singular characters, and neon dialogue, The Mystic Arts of Erasing All Signs of Death is classic Charlie Huston: a wild ride that'll leave you breathless and shaken, grinning and begging for more.