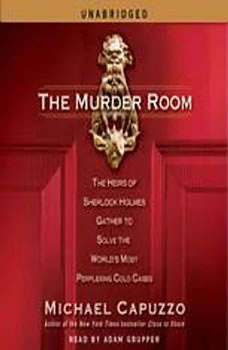 The Murder Room: The Heirs of Sherlock Holmes Gather to Solve the World's Most Perplexing Cold Cases

Michael Capuzzo, the author of the New York Times bestseller Close to Shore , brings listeners into the Vidocq Society, a team of the world’s foremost forensic investigators, who meet each month to solve cold cases and bring murderers to justice. Three of the greatest detectives in the world—a renowned FBI agent turned private eye, a sculptor and lothario who speaks to the dead, and an eccentric profiler known as “the living Sherlock Holmes”—were heartsick over the growing tide of unsolved murders of innocents. Good friends and sometime rivals William Fleisher, Frank Bender, and Richard Walter decided that something had to be done, and they pledged themselves to a grand quest for justice. Named for the first modern detective, the Parisian Eugène François Vidocq—the flamboyant Napoleonic real life sleuth who inspired Sherlock Holmes—the Vidocq Society meets monthly in its secretive chambers to solve a cold murder over a gourmet lunch.The Murder Room draws the listener into a chilling, darkly humorous, awe-inspiring world as the three partners travel far from their Victorian dining room to hunt the ruthless murders of a millionaire’s son, a serial killer who carves off faces, and a child killer enjoying fifty years of freedom and dark fantasy.

The Murder Room deals with the real life elite criminal investigators and profilers who created the Vidocq Society, a place where they all kick back, relax and ponder cold cases. Founded by three extremely different men, the group has gone on to solve many cases deemed unsolvable. The idea of the book itself is good. The group is diverse and fascinating and the cases themselves are often strange. The problem with the book is that it jumps around too much from one case to another, so much so that its hard to figure out if theyre going to address the case again in the book. Theres also the emphasis on Frank Benders love life, which is a little much and not even really on topic. They could make the case that hes a charming cad, but his romantic escapades get old after a while. The book holds attention though, even if the author tends to paint the police departments as overwhelmed and eager to take the credit the Vidocq Society earns, which makes me wonder how enthusiastically those departments read this book. The aspects of cold case work is fascinating though, in particular profiling, which many people have a very distorted concept of.