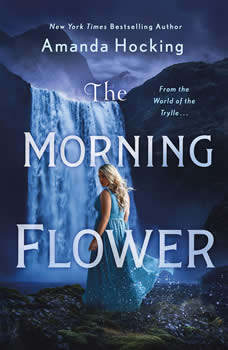 The Morning Flower: The Omte Origins (From the World of the Trylle)

New York Times bestselling author Amanda Hocking returns to the magical world of the Trylle with The Morning Flower, the second audiobook in the Omte Origins arc.

Nestled along the bluffs of the forested coast lays the secret kingdom of the Omte—a realm filled with wonder...and as many secrets.

When Ulla Tulin took her internship at the Mimirin, the only mystery she thought she'd have to solve was that of her birth parents. After a girl named Eliana gets kidnapped while in her care, Ulla knows she has to find out the truth of who Eliana really is—and the only way to do that means traveling to the Omte capital, the place she suspects her mother is from.

Ulla didn’t expect that when she arrived she would discover the identity of a Skojare man who crossed paths with her mother—a man who could very well be her father. When the head of the Mimirin learns Ulla's father is connected to the Alvolk, a secret society who believes they were tasked with protecting the First City and the only ones who know its location, he sends Ulla and Pan to Sweden where they find him living among the Alvolk. But all is not what it seems with the Alvolk and their urgent quest to find the Lost Bridge to the First City leaves Ulla feeling uneasy—and possibly in danger.

The Lost City
The Omte Origins #1

The Ever After
The Omte Origins #3