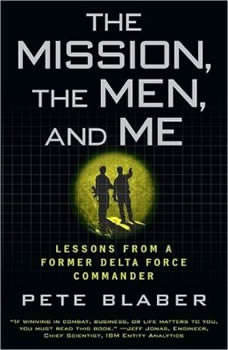 The Mission, the Men, and Me: Lessons from a Former Delta Force Commander

As a commander of Delta Forcethe most elite counterterrorist organization in the worldPete Blaber took part in some of the most dangerous, controversial, and significant military and political events of our time. Now he takes his intimate knowledge of warfareand the heart, mind, and spirit it takes to winand moves his focus from the combat zone to civilian life. As the smoke clears from exciting stories about never-before-revealed top-secret missions that were executed all over the globe, readers will emerge wiser, more capable, and more ready for lifes personal victories than they ever thought possible.

Written with the unprecedented cooperation of the Naval Special Warfare community, here is the definitive history of the U.S. Navy SEALs, a thrilling chronicle that reveals the inside story behind the greatest combat operations of our nation’...

Following the success of his #1 New York Times bestseller Make Your Bed, which has sold over one million copies, Admiral William H. McRaven is back with amazing stories of adventure during his career as a Navy SEAL and commander of America's Specia...

Discover the USA Today bestselling self-help memoir from a former Army Ranger, a hero of the 2012 Benghazi siege, and the subject of the book and movie 13 Hours, as he shares life-changing lessons of discipline, motivation, success, and peace. Thou...

Since the attacks of September 11, one organization has been at the forefront of America's military response. Its efforts turned the tide against al-Qaida in Iraq, killed Bin Laden and Zarqawi, rescued Captain Phillips and captured Saddam Hussein. I...

From the coauthor of the #1 New York Times bestseller Lone Survivor comes the riveting behind-the-scenes story of the three Navy SEALs who captured the "Butcher of Fallujah" and, having been charged with prisoner abuse, their long road to justice. O...

13 Hours: The Inside Account of What Really Happened In Benghazi - Booktrack Edition
by MItchell Zuckoff

NOW A MAJOR MOTION PICTURE13 Hours: The Inside Account of What Really Happened In Benghazi: Booktrack Edition adds an immersive musical soundtrack to your audiobook listening experience! * The harrowing, true account from the brave men on the groun...

NOW A MAJOR MOTION PICTUREThe harrowing, true account from the brave men on the ground who fought back during the Battle of Benghazi.13 HOURS presents, for the first time ever, the true account of the events of September 11, 2012, when terrorists a...