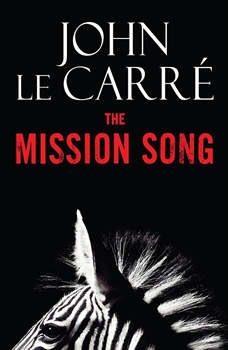 Full of politics, heart, and the sort of suspense that nobody in the world does better, The Mission Song turns John Le Carre's laser eye for the complexity of the modern world on turmoil and conspiracy in Africa.Abandoned by both his Irish father and Congolese mother, Bruno Salvador has long looked for someone to guide his life. He has found it in Mr. Anderson of British Intelligence. Bruno's African upbringing, and fluency in numerous African languages, has made him a top interpreter in London, useful to businesses, hospitals, diplomats--and spies. Working for Anderson in a clandestine facility known as the "Chat Room," Salvo (as he's known) translates intercepted phone calls, bugged recordings, and snatched voice mail messages.When Anderson sends him to a mysterious island to interpret during a secret conference between Central African warlords, Bruno thinks he is helping Britain bring peace to a bloody corner of the world. But then he hears something he should not have...By turns thriller, love story, and comic allegory of our times, The Mission Song is a crowning achievement, recounting an interpreter's heroically naive journey out of the dark of Western hypocrisy and into the heart of lightness.

This book may be one of John Le Carre's 'lesser efforts' as one critic described it, but it would be considered a tour de force had it been written by almost anyone else. The story's flaws, such as they are, are over- shadowed by the compelling, bewitching performance of the narrator, David Oyelowo. The accents, inflections and personalities of the various characters are so distinct that its easy to forget that they all come from a single reader. The story line is as cynical and sad as the most moving of le Carre's earlier work. But the hero, 'Salvo', is a delight: so hungry to believe that positive change is possible that he can't see the duplicity surrounding him. Salvo rings true and his belief in love and hope gives the story a stong ray of light at the end.

I listened and waited for this story to take off but it stayed mired in the super ego of the main character, Salvo. It was about as exciting as driving through central Nebraska. Based on this book, I will probably never choose another of this author's books.