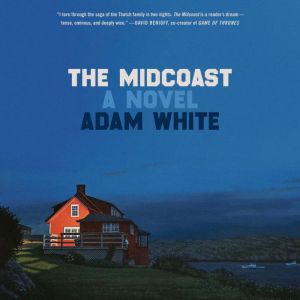 The Midcoast: A Novel

“I tore through the saga of the Thatch family in two nights. The Midcoast is a reader’s dream—tense, ominous, and deeply wise.”—David Benioff, co-creator of Game of Thrones

“In deft, knowing, and crystalline prose, Adam White writes, in essence, the novel about the Maine coast.”—Richard Ford

ONE OF THE MOST ANTICIPATED BOOKS OF 2022—The Millions

It’s spring in the tiny town of Damariscotta, a tourist haven on the coast of Maine known for its oysters and antiques. Andrew, a high school English teacher recently returned to the area, has brought his family to Ed and Steph Thatch’s sprawling riverside estate to attend a reception for the Amherst women’s lacrosse team. Back when they were all teenagers, Andrew never could have predicted that Ed, descended from a long line of lobstermen, or Steph, a decent student until she dropped out to start a family, would ever send a daughter to a place like Amherst. But so the tides have turned, and Andrew’s trying hard to admire, more than envy, the view from Ed’s rolling backyard meadow.

As Andrew wanders through the Thatches’ house, he stumbles upon a file he’s not supposed to see: photos of a torched body in a burned-out sedan. And when a line of state police cruisers crashes the Thatches’ reception an hour later, Andrew and his neighbors finally begin to see the truth behind Ed and Steph’s remarkable rise. Soon the newspapers are running headlines about the Thatches, and Andrew’s poring over his memories, trying to piece together the story of a family he thought he knew.

A propulsive drama that cares as deeply about its characters as it does about the crimes they commit, The Midcoast explores the machinations of privilege, the dark recesses of the American dream, and the lies we tell as we try, at all costs, to protect the ones we love.