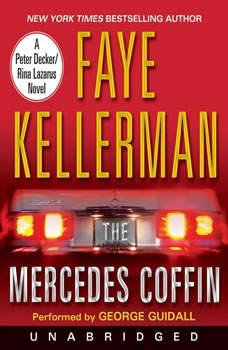 A cold case turns red hot, threatening to consume detective Peter Decker and his wife, Rina Lazarus in the spellbinding new thriller from New York Times bestselling author Faye Kellerman.Billionaire genius Genoa Greeves never got over the shocking death of her favorite teacher, Bennett "Dr. Ben" Alston Little, murdered execution-style and stuffed into the trunk of his Mercedes Benz. No arrests were ever made. Fifteen years later, the high-tech CEO reads about another execution-style murder. The case is eerily similar and Genoa offers the L.A.P.D. a substantial financial "incentive" if justice is finally served.Lieutenant Peter Decker resents having to commit valuable manpower to a fifteen-year-old open case. Still, the recent murder does bear a disturbing resemblance to Dr. Ben's case and Decker can't help but wonder about a connection. Decker's team of investigators includes his newly minted Hollywood detective daughter, Cindy Kutiel, while wife Rina Lazarus continues to be his backbone of support. Rina's worries and fears begin to build as past and present collide with a vengeance, catapulting an unsuspecting Decker closer and closer to the edge of an infinite dark abyss. A relentlessly gripping tale spun by a master, Faye Kellerman's The Mercedes Coffin races through a dangerous urban world, where truth and justice are fine lines between life and death.