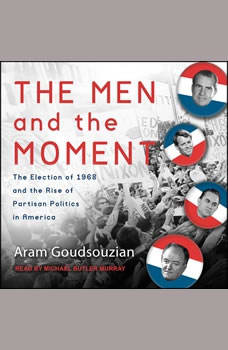 The Men and the Moment: The Election of 1968 and the Rise of Partisan Politics in America

The presidential election of 1968 forever changed American politics. In this character-driven narrative history, Aram Goudsouzian portrays the key transformations that played out over that dramatic year. It was the last "Old Politics" campaign, where political machines and party bosses determined the major nominees, even as the "New Politics" of grassroots participation powered primary elections. It was an election that showed how candidates from both the Left and Right could seize on "hot-button" issues to alter the larger political dynamic. It showcased the power of television to "package" politicians and political ideas, and it played out against an extraordinary dramatic global tableau of chaos and conflict. More than anything else, it was a moment decided by a contest of political personalities, as a group of men battled for the presidency, with momentous implications for the nation's future. Well-paced, accessible, and engagingly written, Goudsouzian's book chronicles anew the characters and events of the 1968 campaign as an essential moment in American history, one with clear resonance in our contemporary political moment.