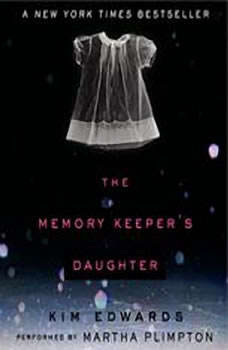 On a winter night in 1964, Dr. David Henry is forced by a blizzard to deliver his own twins. His son, born first, is perfectly healthy. Yet when his daughter is born, he sees immediately that she has Down's Syndrome. Rationalizing it as a need to protect Norah, his wife, he makes a split-second decision that will alter all of their lives forever. He asks his nurse to take the baby away to an institution and never to reveal the secret. But Caroline, the nurse, cannot leave the infant. Instead, she disappears into another city to raise the child herself. So begins this beautifully told story that unfolds over a quarter of a century in which these two families, ignorant of each other, are yet bound by the fateful decision made that long-ago winter night. A brilliantly crafted, stunning debut, The Memory Keeper's Daughter explores the way life takes unexpected turns, and how the mysterious ties that hold a family together help us survive the heartache that occurs when long-buried secrets burst into the open.

The world can change forever in a single...SPLIT SECONDMichelle Maxwell has just wrecked her promising career at the Secret Service. Against her instincts, she let a presidential candidate out of her sight for the briefest moment, and the man whose...

Read this book while on spring break last week with the family in the Keys...was done with in it in 3 days. I enjoyed the story, although at times it seemed to repeat itself a bit. Evokes sympathy for the men in your life, understanding for those with children who face different challenges and a realization that abnormal families are normal...and fabulous. A good book to pick up when you don't want to have to think too hard about what it is you are ready...

This is an excelent read. I completely enjoyed it!

I loved this book. Kim Edward did a great job with the complex minds of the characters.

This book is tough to read but only because of the issues raised. I could only imagine the difficulty raising a child with Down's Syndrome must be. The struggles and the accomplishments. The dreams that may never come true. Regret, worry, sorrow are all very powerful themes in this book. It is an excellent read. Very thought provoking.

I picked up this book with high hopes due to the plot description on the back cover. Once I started reading it I felt slightly annoyed by the lead characters. I know that the time period in which this story takes place does not lend itself to talking openly about family tragedies but I felt that the relationship between the protaganist and his wife was mind numbing. I was hoping she would find out before he died but alas it did not happen. I felt the conflict could have made the story that much better. There seemed to be missing something.